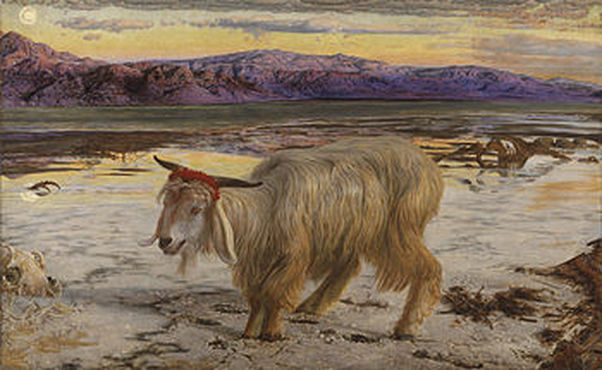 Visits to Holy Land - origins of painting and theme

While painting this picture alone by the Dead Sea, Holman Hunt was surrounded by robbers, but continued to work,
resting his hand on his gun.
The goat, with a red fillet on its head, stands in the  foreground, sinking into the sands. Beyond, the Dead Sea and distant mountains, lit by the evening sun. Signed with monogram, dated and inscribed : Oosdoom, Dead Sea

Holman Hunt's 'Scapegoat' was sent to the Academy of 1856. It arrested attention but puzzled the critics. Sir Robert Peel [q. v.] offered 250l. for it; he wished to hang it as a pendant to a Landseer ! It was ultimately sold to Mr. Windus of Tottenham, a well-known collector, for 450l. It subsequently passed to Thomas Fairbaim, and in 1887 into the collection of Sir Cuthbert Quilter.