Rowland Hill, the Post Office reformer and teacher, lived in Tottenham where he was headmaster of the Bruce Castle school.

Rowland Hill and his brothers had taken over the management of their father's Hazelwood school in Birmingham in 1819 and with the encouragement of Jeremy Bentham they opened a school in Tottenham in 1827. The school was run along radical lines (inspired by the Hills' friends: Thomas Paine, Richard Price and Joseph Priestley) on the principle that the teacher's role is to instill the desire to learn and not to impart facts.   The school followed a radical (for the time) curriculum including foreign languages, science and engineering;  corporal punishment was abolished and alleged transgressions were tried by a court of pupils.  The sons of many London-based diplomats, particularly from the newly independent nations of South America, attended as did the sons of the computing pioneer, Charles Babbage.

Rowland Hill campaigned for reform of the postal system proposing the introduction of prepayment for letters through an affordable uniform penny post.  Before 1840 (and the introduction of the adhesive Penny Black stamp) postage rates were very high, based on weight and distance, and were normally paid by the recipient.

As a young man visiting London in 1817 he went to the exhibition at the Royal Academy, which was then at Somerset House, and saw JMW Turner's The decline of the Carthaginian Empire.  Although the painting, which is now at the Tate but currently not on display, was not in the Windus collection Hill noted in his diary on 23 June:

Upon entering the first room of paintings, my attention was immediately struck with a landscape of Turner’s, the subject is “The decline of the Carthaginian Empire”. It represents the Carthaginians in the act of giving up to the Romans, their army and children, in order to obtain peace. I am totally at a loss for words to convey an adequate idea of the grandeur of this picture: for architectural excellence in the design of the buildings, for the arrangement of the light and colours, it stands very high among the first English landscapes; but for aerial perspective, and distance, which are it’s characteristic feature, it is unrivalled. I have seen the landscapes of Rubens & Rembrandt, and those of Gainsborough; but compared with this in my opinion the works of the latter artist are very inferior, and those of the Dutch School are mere daubs. I cannot tell how Turner would rank with the Italian painters, never having had the opportunity of seeing their works. 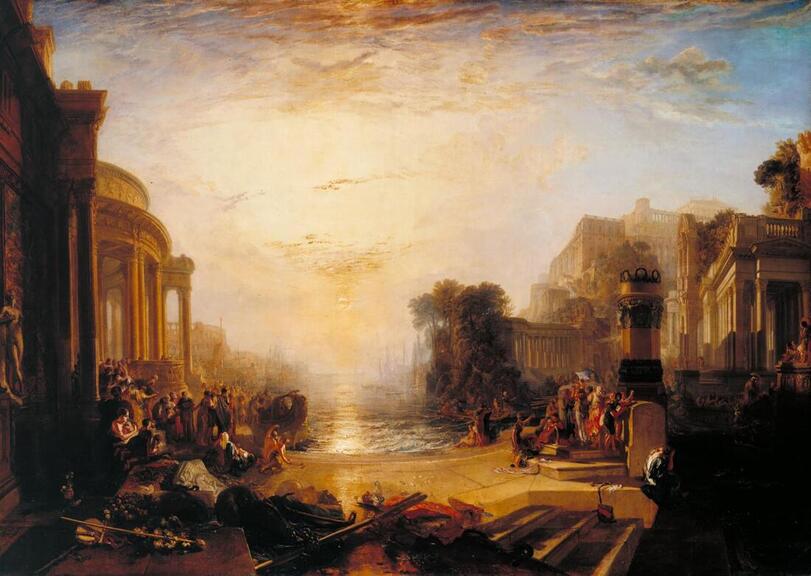