Origins of the Turner in Tottenham website
I first heard of BG Windus and his collection of works by JMW Turner, and later his PreRaphaelite Collection, during research on Luke Howard, "Namer of Clouds", who lived in Tottenham.  His collection was noted in The History and Antiquities of the Parish of Tottenham, 1840 and I came across references to two articles by Dr Selby Whittingham.  Finding a connection between Tottenham and JMW Turner, one of Britain’s greatest painters and a favourite of mine, set me off on this project.
Margaret Burr
Introduction
BG Windus, an eminent businessman who lived in Tottenham, was one of a new class of patrons with wealth and interest who succeeded the landed aristocracy in the patronage of the arts .  He started acquiring watercolours around 1820 and by 1840 had over 200 works by JMW Turner in his collection.  Passionate about the work of Turner he extended his home adding a library to accommodate his growing collection of pictures. These were framed in gold and mounted in a manner of which Turner approved.
Shortly before Turner died BG Windus became an early patron of the Pre-Raphaelites.  Some of their most well known paintings found their first home in the Windus Collection in Tottenham including JE Millais' Ophelia, the most popular painting in Tate Britain; DG Rossetti's Lucrezia Borgia and William Holman Hunt's The Scapegoat.
Other paintings in the collection:

Objects of interest to the Painter and Connoisseur
Murray’s Handbook for Modern London, or London as it is.  John Murray, 1851
Private Collections - Mr B G Windus's Turner Drawings 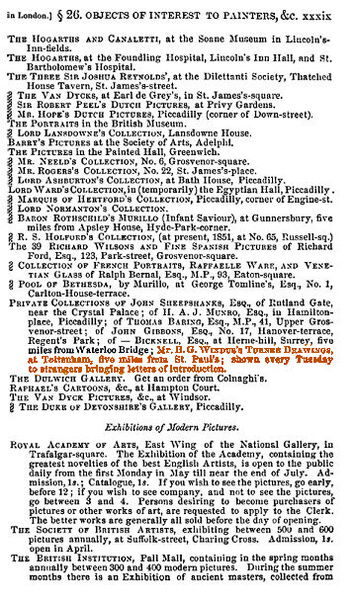