The watercolour of the Straits of Dover, which was used as the source for a print in JMW Turner’s Picturesque Views in England and Wales, was owned by BG Windus. It was last recorded by WG Rawlinson in 1908 as being in the collection of Mr E Nettlefold, but it then vanishes from the records and according to the Tate is ‘currently untraced’.

Fortunately engravings of the Straits of Dover by William Miller still exist. 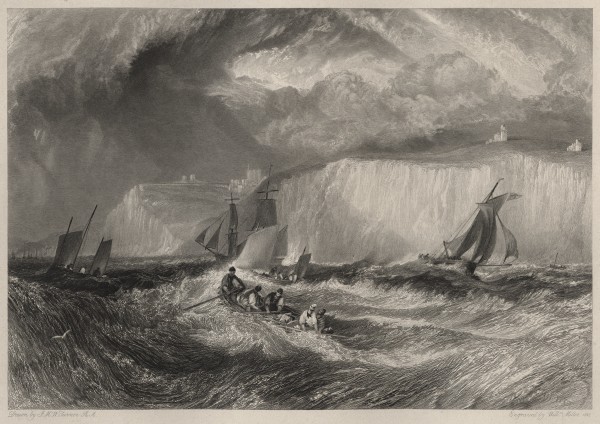 BG Windus bought the watercolour from Turner’s agent, Thomas Griffith, from whom he bought many of Turner’s paintings.

According to James Hamilton in A Strange Business Thomas Griffith was ‘a genuine and disinterested go-between, concerned that works should be in the right hands’ and on selling the Straits of Dover to BG Windus he wrote to Turner:

I have yielded to the pressing solicitations of Mr Windus and resigned your drawing of the Straits of Dover in his favour. He has paid me £50 for it, and as profit found no part of my purpose in this transaction, I enclose you a Cheque for the balance.
The entry for the Straits of Dover in JMW Turner RA: Line Engravings on copper, Macmillan, 1908 by W G Rawlinson reads:
The white cliffs in centre, with South Foreland lighthouse to right castle in dip to left. Rough sea with various craft. Light breaking through stormy sky.
Engraver’s Proofs. Left, “Drawn by J. M. W. Turner R.A.”; right, “Etched by Will'” Miller, 1827″; below, to left, “Strait of Dover.” Nearly finished, but before small fishing-boat below cliff on extreme right. B.

First Pub. State. Same lettering, except “Etched by “altered to “Engraved by.” Boat added below cliff on extreme right. Sea worked upon and darkened.
Second and Later States. “Strait of Dover ” removed. Title and lettering as Bievaulx Abbey, No. 209, but with Date, March 1, 1828.
The Drawing is in the possession of Mr. E. Nettlefold.
This is one of the finest seas in the ‘ England and Wales ‘; it is superbly engraved by Miller. The sky also, full of wind, light, and cloud, is admirably rendered. And the whole scene is so English, so exactly what one sees on landing at Dover on a sunny, windy day.